A sign that says “Work hard and be kind” is displayed prominently in Joe Boyd’s office. The maxim ties into advice he received as a labor organizer that still guides his approach today: Don’t take yourself too seriously, take the people around you very seriously, but
remember that everyone’s got their own issues.

“It’s given me the ability to give a lot of leeway to people,” says Boyd, who began his term as CTA’s executive director Nov. 1. “We’re all imperfect, but we’re all trying to work together to make things better.”

A former educator and son and grandson of public school teachers, Boyd has been helping people and groups organize around issues they care about for more than 30 years — 23 of them with CTA. In the early 1990s, he headed United Teachers of Richmond, helping the chapter in the wake of a state-imposed receivership. He went on to work with rural, suburban and urban locals across the state, handling political campaigns, negotiations and other advocacy efforts. In 2008, he served as executive director for the Teachers Association of Long Beach, which was then in receivership.

Boyd left CTA to found his own advocacy and organizing firm in 2014. In 2016 he became executive director of the California Federation of Teachers.

Now back “home,” Boyd is in charge of CTA’s day-today operations, including management of 400 employees and oversight of more than 1,000 local affiliates. As we chatted with him, he shared that he’s excited to work with members, leaders and staff at a critical time for public education.

What’s on your plate right now?

The Schools and Communities First (SCF) campaign [the 2020 ballot initiative that would bring in $12 billion annually for education and basic community services].

It addresses the issue of funding that we’ve wanted to tackle for as long as I remember. We need corporations to start paying their fair share while protecting residential taxpayers, agriculture, small businesses. That’s the big focus. We’re going to get outspent. The only way we can fight back is to out-organize, to organize our members and our communities.

SCF is part of a longer push to put our schools back to where they should be in terms of funding, to make that structural change. The power we build through organizing our union for this will serve us well beyond November. It’s the fight to have lower class sizes, to have nurses, to have arts and music and sports programs that are funded, to have good technology. This is the start of structural support, not only for our schools but for our communities. SCF deals with all the pieces in communities that are important.

We need to provide every student with the support, the balance they need — in math, reading, sports, everything. Sometimes that’s getting a meal, sometimes it’s getting into Berkeley, sometimes it’s both. Schools are at the center of that. That makes what we do the center, the core, and the place to build out and create understanding with voters and our communities about why our schools are so important.

What made you an activist?

I’d always been an activist living in the co-ops while at UC Berkeley and in Ecuador, where I worked with Amigos de las Americas helping a community fight a high rate of dysentery. I learned basic organizing lessons then: You can’t really do things for people, you have to work with people. They have to have ownership of the projects.

When I was a new teacher and baseball coach at Kennedy High School in Richmond, I was a site rep, but not an activist. Then our superintendent drove the district into bankruptcy. My seniors didn’t know if they would be able to graduate; we didn’t have money for team uniforms or buses. I thought, “This situation is affecting my ability to do my job, so I’m going to get really involved.” I was elected chapter vice president in my second year and became very active. The financial trauma resulted in some 600 teachers getting pink slips. I was one of them. What happened was bad for the community, bad for students.

What do you want members to know about CTA?

The union is just us — people. It’s not a building, it’s not support for this or that, it’s us figuring out what we want to do to make our work lives and our families better, and also make our larger community better.

“The union is just us — people. It’s not a building, it’s not support for this or that, it’s us figuring out what we want to do to make our work lives and our families better, and also make our larger community better.”

My parents were in the union. They weren’t activists, they were supporters. My family in West Virginia has coal mining roots, so unionism was a big conversation — everybody who was living a good life economically was in the union. I understood all that.

But until things got rough in Richmond, I didn’t realize so many things are connected to activism, like retirement and health care. My mom took off more time than permitted when she was pregnant, so she lost her job and seniority and had to start all over again. She got RIF notices every year. We lived a little on credit; we’d worry until she got notice that her job was going to be there.

We’re standing on the shoulders of those who came before us, before collective bargaining existed. What makes us a union is our ability to organize school site by school site. What goes on at that school site on a daily basis is the union, it’s where the union starts.

The reason to be involved in CTA is because that’s who educators are. This is our community. The work we do has the ability to make our classrooms better and our lives better even if our political, religious, generational views are not the same. That involvement is what keeps us going and makes the world a better place.

Current reading: Eyes to the Wind, by Ady Barkan, which chronicles how Barkan’s terminal illness sparked his rise as a social justice warrior; fiction choices lean toward mystery-thrillers set in Southern California

Passion: Baseball (at one point coached by his father, Long Beach Hall of Famer Artie Boyd), and the LA Angels. “I went to game after game [in the nosebleed sections as a youth]. I became a diehard Angels fan, because you have to support the underdog.” 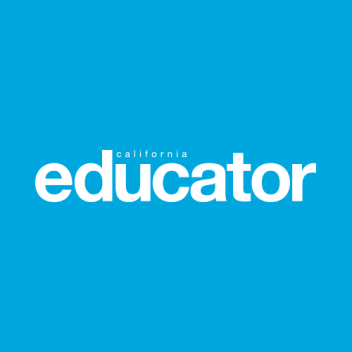